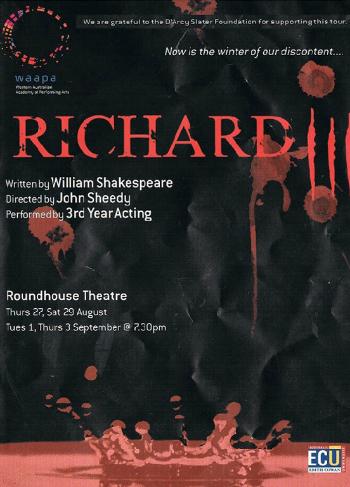 WAAPA invites many renowned professionals to Perth in residence.  The visiting artist endeavours to work with all students throughout WAAPA giving master classes, workshops and classes.  If the visiting artist is a director, choreographer or musical director and is involved in a show put on by the students they would normally be at the Academy for 4-6 weeks, sometimes longer.

Students applying for these scholarships are required to submit a satisfactory school record, interview and audition.  Financial need may be considered in the selection criteria.

​Great to see WAAPA named as one of the best performing art schools in the world.  A US poll ranked WAAPA alongside the Juilliard School of Music and Drama in New York and Guild Hall School in London.

It’s a huge compliment for WAAPA whose past alumni include Hugh Jackman, Lucy Durack and Tim Minchin.

Wilde questions power, politics and love in a way that skewers the very notion of an ideal husband. Ms Jackman was a recipient of the Berlin New Music Opera Award and worked at the Komishe Opera in Berlin. Her credits include writing and directing at the Sydney Opera Company.

The 2019 DSF Travelling Secondment was awarded to Production and Design student Genevieve Scott. Genevieve secured a placement with the New York Ballet where she will be shadowing their resident Stage
Manager; and will observe technical sessions, technical rehearsals and dress rehearsals as they prepare to open their shows. Additionally Genevieve is hoping to view their wardrobe, set and props Departments.

Consists of students performing in metropolitan and rural areas.

​As well as performing in West Australian Metropolitan and Rural area’s the third  year Acting Students travelled to the USA and performed for audiences  including Theatrical Agents which gave them great exposure.